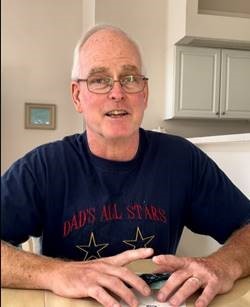 Jack and his wife Amy are originally from Pittsburg, PA. After retirement from the military the family moved here when he went to work for CSX. Having been a navy man for 26 years, Jack was used to working out and ran long distances consistently until one fateful day his car was hit by a drunk driver on Highway 17 at Eagle Harbor Parkway. This man was also an illegal immigrant who tried to flee the scene of the accident.  If it hadn’t been for the quick reaction of the police (90 seconds), helicopter life flight, and the Grace of God, he wouldn’t be alive.  He remained in a medically inducted coma for 24 days.

Before his accident, the Burgesses attended church but weren’t directly involved. He remembers waking up and asking God for some of that good health back.  Pastor Jim was with him throughout the entire ordeal. To this day, Jack holds his prayer blanket from Crossroad and says, “I know what God feels like; He feels like this blanket which feels like LOVE”.  He was so thankful for the prayers, concern and support from our church and pastor that it has changed his life. He was in a wheelchair for 3 months and after a lot of therapy was able to use a walker and eventually walk on his own again.

Jack firmly believes that God saved his life for a reason, but he is not sure yet what that reason is. He also says that God has a sense of humor. If you look at the scars on this body, they resemble a” large happy face”.  He is very happy to be able to be with his wife and have his two daughters back in the area after veterinary and dental school. The Burgesses are also busy with 4 grandkids. He encourages others to be mindful of what they say to God, because God is always listening and to be thankful every day for the ordinary things in life that they take for granted. God has blessed his life, and Jack remains faithful to his tithing and support of the quilters here at Crossroad and encourages others to show their generosity to God and His Church.