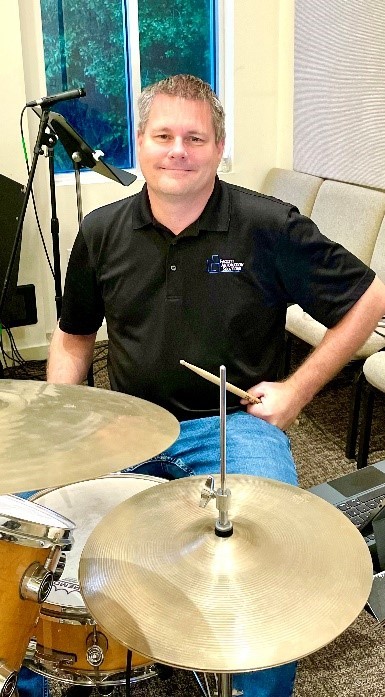 Now most people would not begin their story with “my mother roped me into it” when describing how they were introduced to their home church, but Steve, having a good sense of humor, said that’s exactly what happened.  Before Crossroad even had a building, he was recruited to help with electronics and sound. His mother assumed because her son understood computers, he knew all about sound and electronics. Not being the type of guy to disappoint Mom, he read up on sound boards and electronics!!

The pastor of this newly forming church took an interest in him and reached out in a welcoming way that other churches had not.  Steve liked the more contemporary style of the services both in music and in sermons. After about 5 years, he started drumming for the band and has enjoying being part of the group.  They still laugh at being asked how to hire them when they volunteer to play at a synod meeting.

Because Steve had two young children of his own, he saw a need for a youth group and started teaching Sunday school. Pastor wanted to try and build more disciples and Steve liked his plan for the church. It was simple, teach people to be disciples (followers of Jesus) and gather others to introduce them to Christ through studying and small group discussions. It was with this goal in mind that he agreed to lead as council president.

It has been his joy to see his kids grow up in a church life environment and continue to be involved. His daughter has been newly confirmed, and his son recently returned from being the head male camp counselor at Faith Camp.  Pastor once said, “let your children see you doing something for the church that you may not have wanted to do but did it anyway because it was to God’s glory’. That’s what makes an impact. Steve Barengo is living proof of that philosophy and he additionally believes in growing in generosity to the church especially in these trying times and encourages others to do the same.